May 2019 – Make it move! Meet-up with young LGBTI-activists from Bavaria and Ukraine 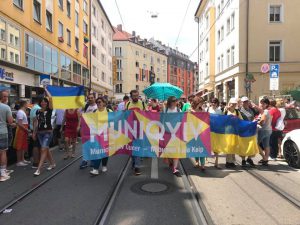 Human Rights above everything! We plan to organise an exchange of young LGBTI-activists, preferably volunteers, with two encounters between people of Ukraine and Bavaria in both countries. The main themes of the project will be to inspire and strengthen the cooperation between our two countries’ LGBTI-organisations and activists, to learn from each other and to plan new common projects. Apply now!

Being in cardinally different stages of the LGBTI-movement development, participants will explore how the fundamental values of equality can be promoted by such a movement and, in particular, will assess a role of Pride March as well as other political actions some of the factors contributing to the mobilisation of the LGBTI-community and their allies at the national and local levels. The programme’s uniqueness lies in its combination of reflective sessions and study visits with participation in the Pride Week events and Pride March in Munich as well as the preparation for IDAHoBIT in Zaporizhzhia/Kyiv.