Our partner, the LGBT-Organisation Gay Alliance Ukraine, has invited the Munich based Artist Naomi Lawrence to hold workshops about Creative Protest in Ukraine. Creative Protest is a simple method how to do politics with creative resources,  in an inexpensive way to express yourself and have fun. Naomi Lawrence has developed this concept and she is now travelling throug Queer Homes in Ukraine. The Queer Homes – these are cultural communication centres for the LGBTIQ-community operated by Gay Alliance Ukraine. With Naomi are Ania Shapiro, an American Human Rights activist from Berlin. She’s, like Naomi Lawrence, part of Munich Kiev Queer. Plus: Mila and Vera, two Ukrainian filmmakers, shooting everything with their camera. In the end we will have a new documentary to show. A joint German-Ukrainian project, a labor of love for all.

Nobody likes to spend 15 hours on a train, but actually it wasn’t too bad, except for the window that didn’t open, that made the trip pretty stuffy. The trip used not to take so long. But Zaporizhiais very close to the red zone, the part of the country where fighting is going on. That’s why the trains make a big detour and that takes time.

We were warned: Zaporizhia has nothing to offer but industrial plants and acid rain maybe. Ha, ha!

As we arrive Monday morning at 5.40 I am confused. Where are all the industrial plants? Never mind, I’m sure I will get to see some. But first we take a taxi to the hotel. I am amazed how much space this city has, although it doesn’t have so many inhabitants. Approximately 700 000. But if you also count the refugees from the east there are far more.

At 11.00 Rostik and Sacha, the  coordinators of gender Z come to take us on a small tour around the city. Sascha I had met in Munich where he had attended a training for volunteers by MKQ and GAU in 2015. It’s really good to see him again.

This town is so different from Odessa or Kiev. It is spacious but somehow also scattered. Plenty of green, but also plenty of grey. We cross the main road of Zaporizhia, Soborny Boulevard. It is the longest Boulevard in Europe – 12km – I am impressed. But still I can’t see any industrial plants… 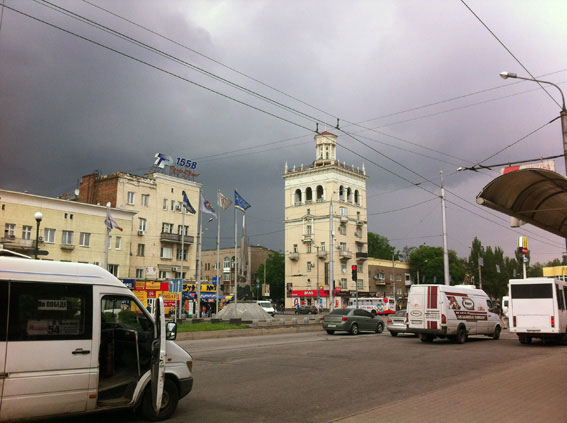 On our way home it suddenly starts pouring. We run for shelter under a roofed bus stop. This is the time to enquire about the acid rain. Will I really loose my hair when it gets wet in the rain? Rostik can’t help laughing. Indeed, Zaporizhia is one of the most polluted towns in the Ukraine, but actually acid rain isn’t the problem, it’s the ground water that is mostly affected.

My workshop starts at 18.00 at genderZ. This project is also part of GAU and works similar to a Queer home. An open space with an open programme and many possibilities for people to join in. Today they offer my creative protest workshop.

Many participants come, mostly teenagers and a few twens. Rostik and Sascha although only 30 years old, are a kind of father figure to them. One girl comes with her mother. She supports her daughter and is also interested in creative protest. 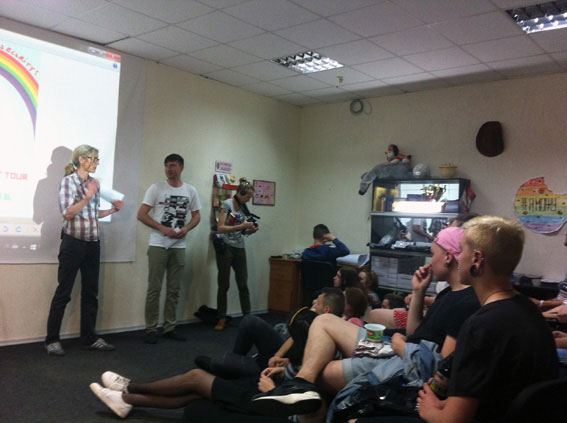 I’m thrilled. Everything is prepared: Paper, paintbrushes, a projector and more than 20 participants. We start the workshop in time since everyone came on time.

Rostik gets the tough job of translating the workshop, since only few people understand English here. In spite of the heat in the room they are attentive and very willing to join in. They paint and express themselves, they ask questions and also respond to them. They develop many ideas for flashmobs. Towards the end of the workshop at 22.00 it is Rostik and me who have to give in. Talking and thinking has become too difficult. But that doesn’t matter, because the plan for the next day is already set:

At 9.00 Sascha and Rostik take us for a trip to Chortyza, the biggest island in the river Dnjopre. One part of it is a natural reserve and the other part is a recreational area. In this area they built an historical village as scenery for a film which is now a tourist attraction. Here a big statue of a Kosak catches our attention. 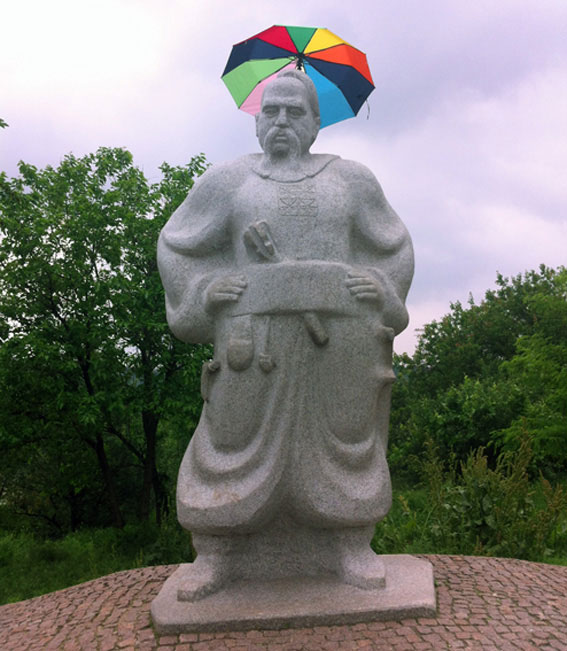 At 11.00 we’re already back in genderZ because from 12.00 on people will come to prepare the flashmobs. Andrew, one of the participants swiftly sends me a new idea for a flashmob via Facebook. It’s full of action. I like his idea just as much as his enthusiasm.

At 12.00 we start preparing the flashmob. Zaporizhia has a park with a huge rainbow monument in it. That is of course asking to be part of one of our flashmobs! We will paint the appropriate hashtag for it:

#ПідтримуюКиївПрайд2016 (#WesupportKyiv Pride2016) With this transparent we will stand under the rainbow. The making will be a challenge because it has to be 5m long. But with the projector and a few tricks it is not so difficult. Within one hour we are finished. 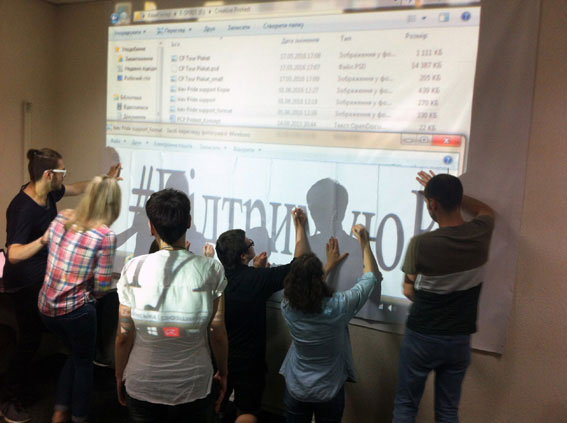 Meanwhile a second flashmob is being prepared. We have chosen another object in Zaporizhia to be our ambassador. A big heart standing between the letters I and ZP.

I love Zaporizhia. Obviously a promotion campaign of the city. The only thing missing on it is our hashtag for Kyiv.As we start making our way to the park we are again more than 20 people. Nobody seems to be anxious. Is that due to young age?

The rainbow is standing on a small hill from which we can oversee the Dnjopre. The widely asphalted ground around it, we have it more or less to ourselves. We do not have much of an audience here. On the one hand that is good, because that means that there can’t be any confrontations. On the other hand it also means there can also be no communication with the people. But in this case it is intended. This action is meant to be a symbolic support for the Kyiv Pride. It’s not meant to be interactive.

There were also several ideas for interactive flashmobs, but they require careful preparation. For that we didn’t have enough time. Our action doesn’t take long but it is visually impressive. It expresses support and the hope for a peaceful KyivPride.

After that we walk back to the town centre. But actually town centre creates the wrong picture. The centre stretches over a distance of about 5km along the Soborny Boulevard. Finally we arrive at the Heart clock, a big grandfather clock in front of which the ‘I love ZP’ heart is located. This place is much busier. Therefore the flasmob is carried out much more quickly. And once again we create a picture of optimism and cinfidence. It’s obvious that the participants are mostly happy and not anxious.

What’s going on here in Zaporischie? No industrial plants, no fear…

This small and young community is very close, in fact it’s like a kind of family. There’s no question that the reason for this sense of community is Rostik and Sascha. They are the source of this positive energy. From the outside this is obvious, but I’m not sure, that they themselves know that they are making the difference. Now the flashmobs are over. Everyone is signing the rainbow umbrella, which has become a kind of olympic torch. It’s last station is going to be Kyiv. But how about us? Nobody seems to want to go home. So I suggest we could make a detour and visit the statue of the composer Michailo Glinka. I had seen it the day before and noticed that his right hand seem to be holding an invisible umbrella. Everyone wants to go there, but by now that doesn’t surprise me anymore…

On the way there I noticed that we were missing one very important tool. The extension rod. Luckily I found a stick that was about 1m long on the way. But when we got to the statue it became more than obvious, that it wouldn’t be long enough. What to do? We discuss, shall we climb up? It’s too dangerous and illegal – the police station is just around the corner. Then Alex climbs onto Andrews shoulders. But that turns out to be very instable and doesn’t add much height to the umbrella either. Then Rostik and Sergeji try to do Räuberleiter with some taller guy. But he backs away. So I am ready to help since I’m one of the tallest of the group and am not afraid of height. It works, I’m standing on their hands and I’m holding the umbrella as high as possible. I can’t place the umbrella in Glinka’s hand but at least it is now looking over his shoulder.

The visual outcome is not totally convincing but the happening itself had become a kind of team building exercise: Obstacle – Teamwork  – solution. And all of this with a shot of Adrenalin, due to the nearby police station. But again, everything goes smoothly. No police, and no aggression although many people are present. We widen our boarders and discover the boarders of the society. Visibility and communication. The LGBTIQ needs visibility so that it can be recognized by the society. And then it is important to communicate with each other, so that opinions can change. This process has to take place on an individual and on a collective basis.

Tomorrow we are driving to Krivyie Rig, another Industrial city. Let’s see if they have any industrial plants…