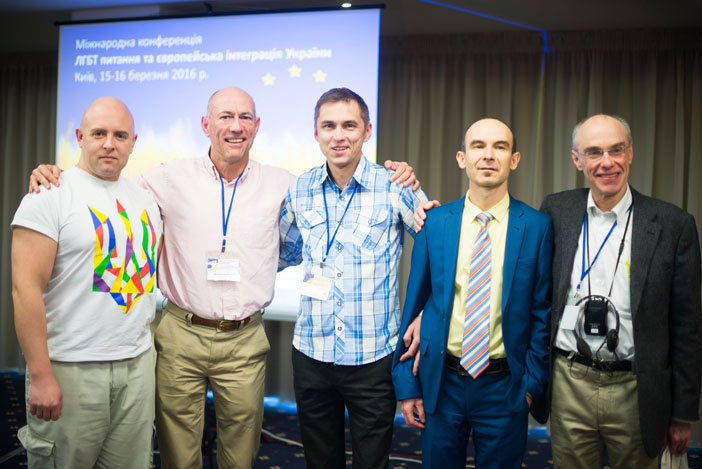 Progress in the rapprochement between Ukraine and the EU is inextricably linked with compliance and expansion of human rights in our country, particularly regarding LGBT people, and this, in turn, is possible under two main conditions – the further improvement of legislation and addressing homophobia in Ukrainian society, – in this way we can formulate the main conclusion of the international conference “LGBT issues and European integration of Ukraine”, which ended on April 16 in Kyiv, reports the Press Service of the Council of LGBT Organisations of Ukraine.

“Ukraine has very rich growth potential. This potential you are developing through adoption of just laws that make the country better for life. Many religious leaders are stuck in the Middle Ages that prevents making the country better. But politics in Europe goes on, and now even Christian Democrats have no complaints about the human rights of LGBTI people. The EU is based on principles of good governance and equitable social order. We support the European line of the Ukrainian political leadership who take steps to meet our efforts,” – said in her speech Sophie in ‘t Veld, an MEP from the Netherlands.

“We provide for LGBTI not specific but equal rights. I hope that in five years Ukraine will reach the level of the UK to protect and guarantee human rights. But that it will happen it is necessary to have positive examples of openness from  LGBTI people, so we are ready to support Ukrainian initiatives within which LGBTI people openly declare themselves,” – said British Ambassador to Ukraine Judith Gough.

“Ukraine is a leader in the field of human rights in the post-Soviet space, and in the future maybe will even become a model for Russia. But we should not stop here and decisively move on in the sphere of human rights, improve anti-discrimination legislation, and specifically for the LGBT –  legalize the institution of civil partnership,” – expressed her opinion Svitlana Zalishchuk, a Ukrainian MP, Chair of the Subcommittee on Euroatlantic Cooperation and Eurointegration of the Parliamentary Committee on Foreign Affairs. 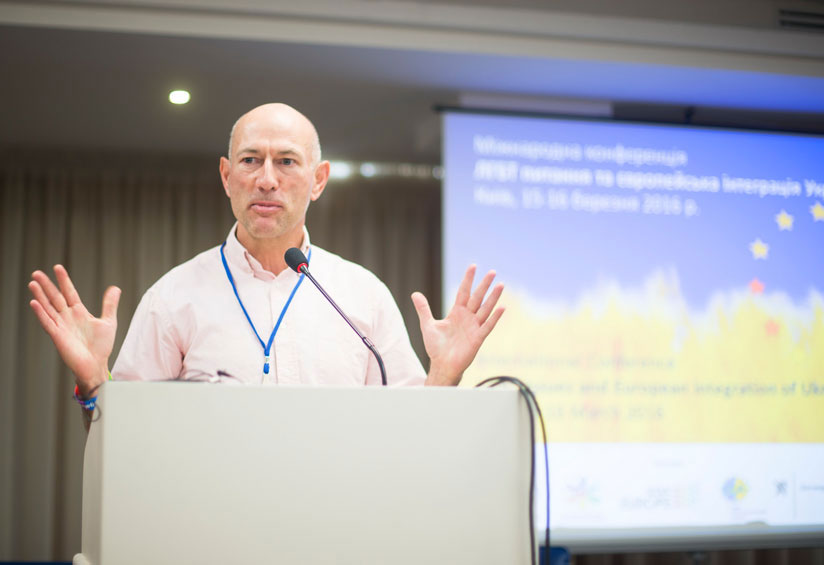 “In 2015, there have been real improvements in human rights for LGBT people in Ukraine: the anti-discrimination amendment was introduced in the labour legislation. At the same time, we as the office of the Ombudsman record frequent instances of hate speech and physical aggression towards LGBT people. The level of prejudice against LGBTs remains still high,” – noted in her speech Aksana Filipishyna, a representative of the Ukrainian Parliamentary Commissioner on Human Rights.

“Human rights is a dynamic phenomenon. Often the letter of the law remains unchanged, but the spirit of the law changes. We cannot protect human rights selectively; rights and freedoms must be guaranteed for everyone. In particular, the Ministry of Justice this year registered the National LGBT portal of Ukraine as a news agency,” – said Serhii Petukhov, Deputy Justice Minister of Ukraine for European integration. – “Homophobia is a kind of “alternative value” which Russian propaganda imposes as President Poroshenko said. But the improvements are not possible without discussion around the issues.” 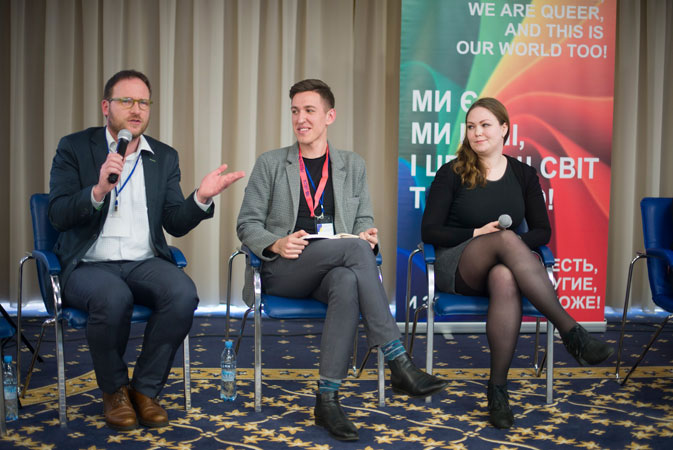 “The European Union welcomes the adoption of the Action Plan to Implement the National Strategy on Human Rights until 2020, which contains a number of measures aimed at the LGBTI community. This is a very timely step. Ukraine needs a broad dialogue on human rights, but we emphasize that homophobia cannot be justified with religious beliefs,” – stated Tanel Tang, Advisor on Human Rights of the Delegation of the European Union to Ukraine.

“Right now we see a new surge of homophobia in Ukraine. A part of Lviv public opposed holding in the city the Festival of Equality, which aimed at promotion of human rights and freedoms for all Ukrainians, dubbing it “gay parade” following activists of Svoboda Party. Our friends from England, the Czech Republic, Netherlands, Germany and other EU countries convincingly argue by the example of their countries: the sooner state and society ensure the rights and safety for LGBT people, the higher level of economic development will be, because the personal freedoms constitute a part of the economic potential, while hatred and a high degree of aggression in society conserve crisis. The course of the LGBT movement is a course for the development and prosperity of our Motherland,” – said Svyatoslav Sheremet, the leader of Gay Forum of Ukraine.

“You can count on me to promote human rights and freedoms through the Parliament,” – assured the conference Serhii Leshchenko MP. “The Action Plan to Implement the National Strategy on Human Rights until 2020 is a decisive and encouraging step towards achieving genuine legal and social equality for LGBT Ukrainians, and we are grateful to the Ukrainian Government for its adoption and taking into account the most of the proposals from Ukrainian LGBT organisations. However, this is only a declaration of intentions. The Ukrainian LGBT community will closely monitor the implementation of the proposed changes, and for our part we offer any cooperation and assistance in this,” – noted Andrii Kravchuk, a representative of the organizer of the conference, LGBT Human Rights Nash Mir Center.

The international conference “LGBT issues and European integration of Ukraine”, which completed its work in Kyiv, was attended by about one hundred and fifty participants from 15 European countries, including European and Ukrainian politicians, public figures, academics from a number of universities, writers, lawyers, bloggers, journalists, policemen, and diplomats. The authorities of our country were presented at the conference by officials from the Ministries of Justice, Culture, Interior, Office of the Ombudsman, and members of the Ukrainian Parliament. The National Police of Ukraine reliably ensured observance of public order at the place of the conference.

The event was organized by LGBT Human Rights Nash Mir Center in partnership with the Council of LGBT organizations in Ukraine, Coalition for Combatting Discrimination in Ukraine, ILGA-Europe, and with the support of the Embassies of Norway and Great Britain.