The 7th Equality and Pride Days, a Human Rights’ Event, was held from September 1st to 6th in the Ukrainian city of Mykolaiv. The event, organised by the non-governmental public organization LGBT-association LIGA, supports the dialogue among different communities on regional level by holding culture, sports and educational events that break stereotypes and social and cultural barriers which prevent gays and lesbians from feeling themselves full members of Ukrainian society.

The Equality and Pride Days included a special discussion club for media about the situation with LGBT-rights; workshops for LGBT-activists on Human Rights’ Monitoring, a workshop for psychologists that are working with LGBT-People, a workshop on volunteering for young LGBT-activists, sport competitions and cultural events. About 100 participants from five countries and eight regions of Ukraine took part in the Days. 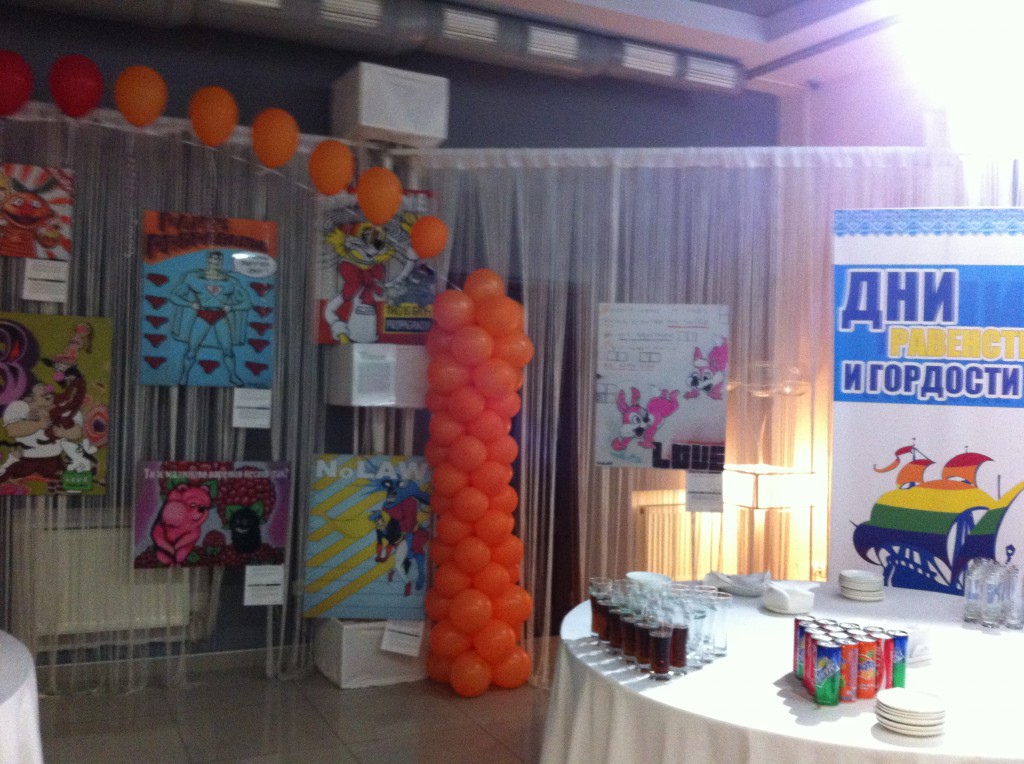 The member of the contact group Munich Kiev Queer, the artist Naomi Lawrence from Munich, made her input in the Equality and Pride Days with her exhibition “Gay Propaganda”. Twelve pictures were exhibited during the week in the framework of the LGBT Culture Maidan (Square) for LGBT-artists and community.  The guests of the Days presented social theater, LGBT-films, poems, stories, handmade rainbow art and many other interesting things showing their attitude towards the situation with LGBT-rights and life in the country.

Two public events were held during the Equality and Pride Days. The first one was totally spoiled by the right wing aggressors. Due to the risk of violence, LGBT-activists failed to show their respect to the heroes of the Ukrainian Revolution of Honor and lay flowers to the monument for those who died in the Revolution. It is a shame that still LGBT-people are not welcoming to be patriots in their own country.

The second event, the Bicycle Run for solidarity, was approved by the local authorities a month before the date of event. But two days before the event local city council tried to ban the Run in the court. From 9 am till late the lawyers and leaders of LGBT-association LIGA were fighting with the government in the court and won! They had to allow the activists to cycle across the city. But still, the danger of violence from the aggressive right power existed. That is why not so many people came for the Run as were expected before. But the group of brave cyclists consisted of representatives of LGBT-organisations and allies from Mykolaiv, Odesa, Kyiv, Kriviy Rig and Kherson did the Run, protected by the police forces.

After the Run, the aggressors from the Right Sector blocked the participants of the Days in the hotel where workshops took place. Only after negotiations with the local representatives of the Ministry of Internal Affairs aggressors left the hotel.  Luckily, they were not so willing to be violent as their colleagues in Kyiv or Odessa that attacked Pride events in these cities.

The Equality and Pride Days were supported by ILGA Europe, COC Netherlands and the Ombudsman Office in Ukraine.