Despite crisis and unrest in the east of the country, the organisers of KyivPride in Ukraine still want to fight for human rights. From 30th of June until 6th of July Kiev, Munich’s partner town, invites the whole lesbian, gay, bisexual and transgender (LGBT) community to the Christopher Street Day” event in Kiev. A week of cultural and political events will take place rounded up at the end on Saturday, 5th of July, by the parade (which has been going on in Munich since 1980). Now it‘s official, the capital of Bavaria is supporting KyivPride as it did last year and the year before!

City Councillor Lydia Dietrich (Bündnis 90/ Die Grünen) will be going along to Kiev as a representative of Munich’s recently elected mayor, Dieter Reiter (SPD). Lydia Dietrich stated: “Especially this year it is essential that a strong sign is given that human rights are supported. The partnership between Munich and Kiev can and wants to lead the new government on its way to Europe and will support the development of the democratic process.”

Two years ago. Ms Dietrich was herself involved in a life threatening situation whilst she was supporting the aborted KyivPride with Sascha Hübner, psychologist working for Munich’s gay community centre SUB. Last year, Ms Dietrich attended with Hep Monatzeder (Bündnis 90 / Die Grünen), mayor this time, where the parade was held under extremely tight security. 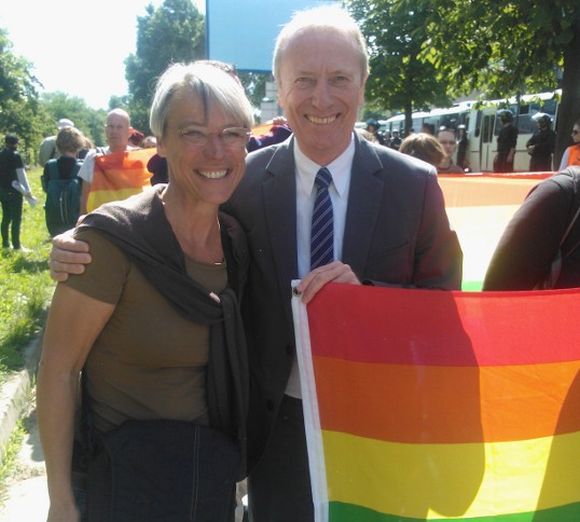 The organisers of KyivPride have arranged a rich program of events for the LGBT community during the Pride week lasting from 30th of June until 6th of July. The program includes receptions, readings, concerts and parties that the group from Munich will be attending. The queer band Tubbe is coming from Munich/Berlin along with a podium discussion involving lesbians from the Munich group discussing “Lesbians‘ space on a heternormative planet. Forms of lesbian activism in Munich”. In addition, the Munich group will be meeting the members and organisers of many Kiev LGBT organisations, visiting the Heinrich Böll Foundation and the German Society for International Cooperation GIZ. A reception will also be held at the German embassy in Kiev.

Following the recent revolution, the Ukrainian LGBT have aligned itself with joining the EU. “Ukraine must overcome external aggression and the communities have been played against each other. We are against this.” This was said recently by Olena Shevchenko, representative of the KyivPride and also leader of the LGBT group Insight in Kiev. She continued: “We stand for peace and tolerance, for a community consensus. Human rights are not just empty words for Ukrainians. It is a tradition of the country to be able to go to the streets and that’s what we are doing.” This year’s Pride slogan is: “Ukraine is united and we are part of it”.

CSD has been celebrated in Munich since 1980. Tens of thousands of LGBT go on the parade year in year out in order to demonstrate and, with various themes, encourage acceptance and equal rights. Partners of the official CSD committee in Munich (GmbH) are LeTRA (Lesbian advice), The Munich AIDS Hilfe (Aids charity), the Rosa Liste (Pink Party) and the gay communications centre SUB. In 2012 the motto was “Fight for global rights – solidarity recognizes no borders”. After this event, the scene in Munich started its association with its partner city, Kiev. This year’s slogan is based on gender and identity: “Rainbow of the sexes. We are all of value!”