In 2019, the activity of Ukraine’s LGBT community increasingly carried on, says the NGO Nash Mir in its Annual Report for 2020. The number of Kyiv Equality March participants reached 6-8 thousand, and those of the first Kharkiv Equality March – 2-3 thousand, which even exceeded the expectations of its organizers. Kyiv Equality March 2019 became unprecedented not only for the number of participants, but also for their composition: for the first time marchers included the official delegation of a governmental institution (the Public Health Centre of the Ministry of Health), for the first time a column was formed of LGBT veteransand volunteers who fight against the Russian aggression as well as a column of people with disabilities.

Increased visibility of Ukraine’s LGBT community draws public attention to its problems and causes demands to solve them that politicians and government officials find increasingly difficult to ignore. Ukrainian LGBT organizations for their part make a great contribution to the solution of such problems, including through cooperation with law enforcement and government bodies as well as by espousing educational activities for representatives of such key professions as journalists, teachers, psychologists, and social workers.

Hate Crimes are not investigated

Violence by right-wing radical groups remains a sore issue for Ukrainian LGBT organizations and individual activists. The situation in this area has not undergone significant changes compared with the few previous years: right-wing radical organizations do not reduce the rate of their homophobic aggression, and law enforcement agencies do not take steps to effectively address this problem. Most high-profile events such as Equality Marches are provided with sufficiently reliable protection from attacks by their aggressive opponents, but in other cases the police usually act very passively. Hate crimes against LGBT people are investigated ineffectively, offenders often avoid responsibility, and the motives of intolerance on grounds of sexual orientation or gender identity are ignored in Ukraine. 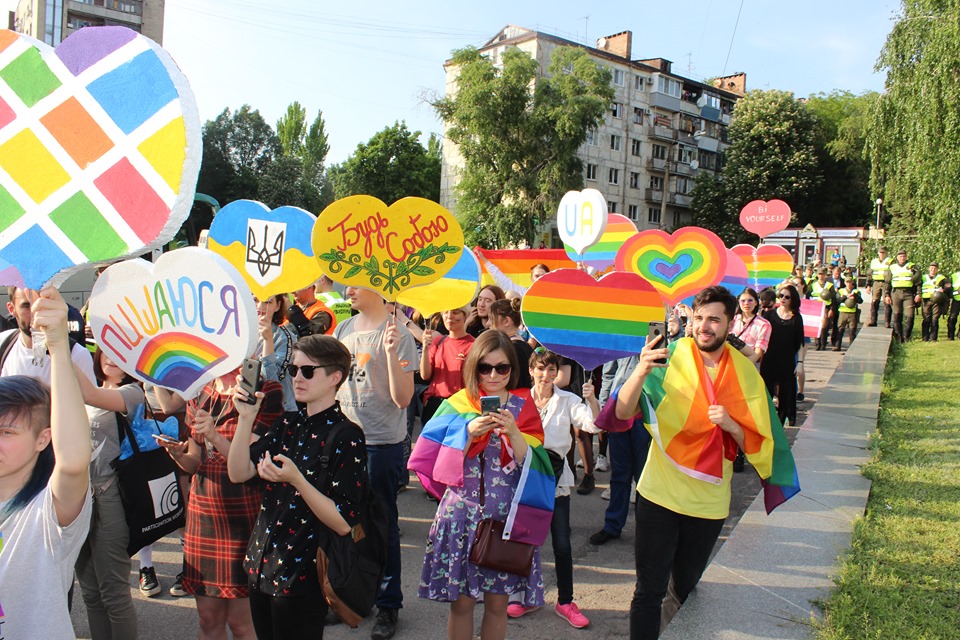 Since the beginning of 2019 Ukrainian legislation concerning the interests and rights of LGBT people has undergone no significant changes. The implementation of the LGBT components of the Action Plan on Human Rights, the deadline of which had already expired in previous years, moved no farther beyond its stalling point – including amendments to the Criminal Code that would allow the consideration of homophobic / transphobicmotives in the commission of crimes for their proper qualification, investigation, and appropriate punishment for the offenders.

The political life of Ukraine in 2019 was focused on the election campaign, the presidential and parliamentary elections, and formation of a new central government according to their results. LGBT issues have not played any important role in these events. In 2019 Ukrainians elected the new president – Volodymyr Zelenskyi – and the new parliament which appointed the new government headed by Oleks ii Honcharuk. Although, in general, the new authorities consist of younger and more modern, less religious and conservative people than their predecessors, for now this has not led totheir taking real steps in addressing LGBT issues.

The Ukrainian churches in 2019 maintained their traditional implacablehostility to protection of LGBT people’s rights, but their influence on the new government has significantly diminished. President Zelenskyi, unlike his predecessors, did not participate in religious ceremonies, and the main lobbyists of churches’ interests in the previous administration have lost their positions.

Nash Mir Center in 2019 documented 369 cases of actions motivated by homophobia / transphobia, discrimination and other violations of LGBT rights in Ukraine. Representatives of the LGBT communities of the large cities, where they are the most visible – Kyiv, Kharkiv, Odesa, and also Kherson – most often suffered from homophobic / transphobic aggression, discrimination and other violations most often.